How to Use Diatomaceous Earth in the Garden 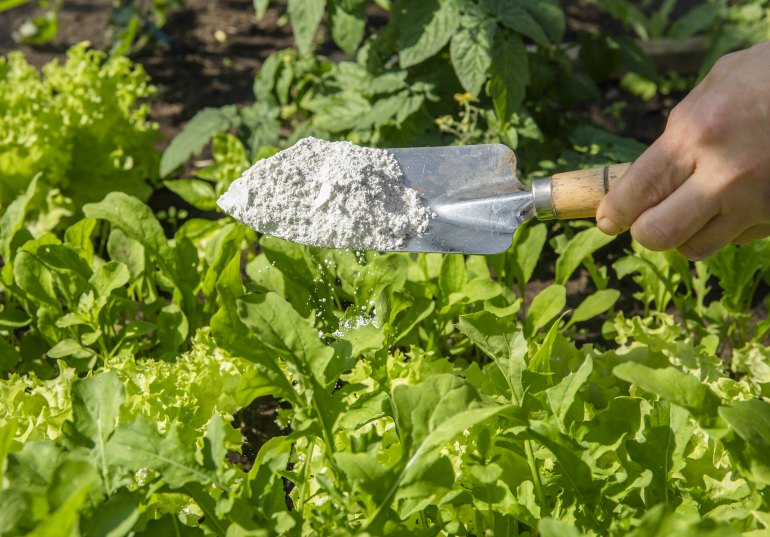 Gardeners are often given the advice to sprinkle diatomaceous earth (DE) around plants to deter pests. But what is DE? How does it help? Is it harmful? We’ll answer all those questions and more hopefully!

So what is DE?

Diatomaceous earth (DE) is the fossilized skeletons of microscopic single-celled aquatic organisms called diatoms. Their skeletons are made of a natural substance called silica—which makes up 26% of the Earth’s crust by weight. Deep deposits of diatomaceous earth are mined in the western United States in places where lakes once covered the area millions of years ago.

DE helps prevent some pests, such as slugs and snails. These critters dislike crawling over DE because the tiny skeletons of the fossilized organisms tend to cut into them. When a slug or snail is cut, it will lose hydration and eventually die.  As a method of survival, these pests avoid DE. This works on most soft-bodied insects, such as caterpillars and aphids. It can also help prevent pests those with hard shells, such as beetles, fleas, cockroaches, and even bed bugs. Unfortunately, DE can also be destructive to helpful bugs. Ladybugs, green lacewings, butterflies, bees, and other “good bugs” will also be affected by DE.

But is DE harmful to birds or pets?

DE isn’t known to harm birds. It is commonly encountered by birds and other wildlife, and it’s not known to be harmful. Agencies have stated that diatomaceous earth is unlikely to affect birds, fish, or other wildlife in a harmful way. Note that it’s important to buy food grade diatomaceous earth, which is predominantly the amorphous type mentioned in the quotes above. If you have pets, such as ducks, that regularly walk through your garden, you may want to take precautions and consider disallowing the animals access to the garden.  We like the ducks to poop (it’s good for the soil) and eat the bugs off our plants, so we let them freely roam. They won’t do damage like chickens will, so if we used DE, we would simply fence the ducks out.

Also, consider your personal safety. You should get a mask and safety goggles to minimize the irritation. DE is very fine and dusty and easily inhaled. If inhaled, even food grade DE can cause inflammation and scarring of the lungs.  This condition is known as silicosis and is often attributed to miners.

So how do you use it in the garden?

First, you want to select food-grade DE, just in case. And a quick FYI, the DE used in pool filters is not effective against garden pests, so don’t put it in your garden.

Once you’ve purchased some DE, sprinkle bands of it around the plants you are trying to protect from pests. It’s important that the ring of DE does not have any gaps for pests to sneak through.  If pests are eating the leaves of your plants, you can dust the leaves with DE, which should discourage further damage. However, you should avoid applying DE near the plants’ flowers, where pollinators might inadvertently come into contact with it.

DE works best in dry conditions. It clumps together when wet, so you will need to reapply after it rains.

DE is safe if used correctly and precautions to protect your eyes and lungs are taken.  It’s also suggested you keep pets away from it, even if it’s food grade. It can be effective at the repelling of pests in your garden, so if you decide to use it, just make sure you’ve done your due diligence and researched it.